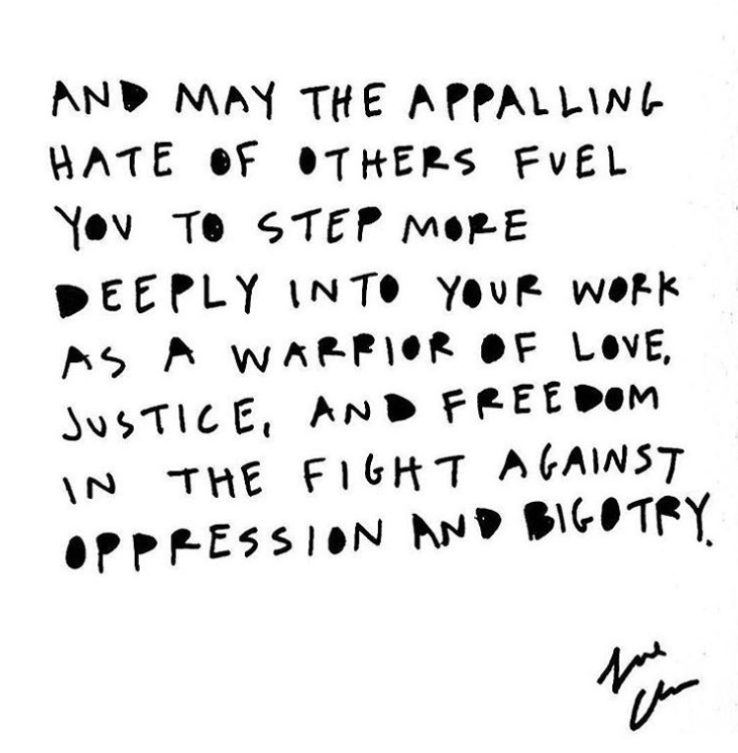 “I post most often about political matters over on twitter, but when I post them on Instagram or Facebook I’m always amazed by how many people say some version of “stick to writing,” as if writing can ever be separate from politics.  Like our literature, our lives are never apolitical, even if we believe them to be.  We are always making a choice to see or not see, to speak against or for, to call out injustice in others and examine it in our own hearts, minds, and actions, or to pretend it doesn’t exist.  I’m horrified by the beliefs expressed by the white nationalists who marched on Charlottesville this weekend, but I am not surprised by them.  Their protest was a display of bigotry that runs all the way back to our nation’s beginning.  Their words of hatred and their violent actions are the death rattle of those who have been (and still are) the beneficiaries of white male heterosexual power in the face of a society — yes, that’s still us — who at least aspires to equality and tolerance.  They are angry because they know they’re losing.  They are carrying those furious torches because they know the darkness of their story will never light the way.  We light it every day by choosing love over hated [sic], kindness over cruelty, generosity over fear.  There are not two sides.  There is no other way.”

i have read several posts on my Facebook feed from supporters of the president that read like they would have us turn our attention away from the underlying hatred that has become more and more apparent in this country.  while i agree that there are a great many things our nation should be concerned with like education and the economy, i don’t think that we can turn a blind-eye to racism and domestic terrorism.  we all have to agree that white nationalism has no place in our society.  we all have to agree that divisive symbols of racism and oppression, like the confederate flag, have no place in our society.  i’m not saying we forget our nation’s history.  i’m saying we learn from it.  we become better citizens, better neighbors, better humans, because of it.  we teach our children and grandchildren that hate doesn’t always win, because in case anyone forgot, the confederacy lost.  jim crow lost.  segregation lost.  let’s not backtrack now.

so today’s #mondaymantra is a call-to-arms.  it’s a plea that you allow yourself to be angered by the hatred spewed by a small group of small-minded people.  it’s a hope that you always speak up against oppression, against prejudice, against racism.  and that you act against it in peaceful and respectful ways.  and that someday we find ourselves never having to have this conversation again.

View all posts by Candice